In April, the Department of Energy finalized two rules requiring manufacturers to sell energy-efficient lightbulbs. This means older, inefficient lightbulbs that don’t meet the new standards can no longer be manufactured and sold. The primary purposes for these rules are to drive down electricity use, save consumers money, and decrease greenhouse gas emissions. Read on to learn more about the new incandescent lighting rules, why they are in effect, and what this means for businesses and consumers.

What Are the New Incandescent Lighting Rules?

These new rules ban the sale of lightbulbs that produce less than 45 lumens per watt. A lumen is a measure of how much light is emitted for each unit of electricity. This will eventually prohibit most incandescent and halogen lightbulbs from being manufactured and sold, shifting toward compact fluorescent and LED bulbs. In 2020, it was estimated that these bulbs still made up 30% of the lighting market.

The ban will take effect 75 days after it’s printed in Federal Register, but the Department of Energy will start enforcing over a longer period of time. Full enforcement of rule begins January 1, 2023, and businesses will have an extra seven months to comply.

Why Are These Rules in Effect?

It’s estimated that these rules will generate $3 billion in savings annually for consumers. It’s also projected to cut carbon emissions by 222 million metric tons over the next 30 years. That’s equivalent to what 28 million homes generate each year.

Plus, each month that incandescent lightbulbs keep being sold equates to about 800,000 tons of carbon dioxide emissions that will enter the atmosphere over the product’s lifetime. Eliminating those bulbs can help save the planet.

What Does This Mean for Businesses And Consumers?

The passing of these rules has several implications for both businesses and consumers in the U.S.

In 2022, it’s estimated that nearly 77% of U.S. zip codes qualify for a commercial and industrial LED lighting and controls rebate. However, utility programs are now phasing out lighting rebates for LED A Lamps. Soon, consumers will only be able to choose from fluorescent and LED in the A Lamp category, which will result in lesser rebates due to the lack of competition in types of A Lamps. For example, in Maryland and DC, an LED A Lamp can be purchased now for around $0.50 (after rebate). Once the rebates are phased out, the cost will increase considerably.

This phase out could happen as early as October 2022 through the end of the year, so many lighting professionals are encouraging consumers to buy now to still receive the price break.

The speculation is that fluorescent A lamps will eventually be banned as well, though this has not been determined yet.

Additionally, the American Lighting Association fears this quick pivot to energy-efficient LEDs can result in major financial losses for lighting manufacturers and retailers, and a large amount of inventory being sent to landfills. However, there are recycling programs in place to recycle any of these outdated lamps and keep them out of landfills. Plus, incandescent and halogen bulbs can be extremely hazardous if not disposed of properly, so it’s important to contact your local commercial lighting professional to learn about their recycling programs.

The good news is many retailers have already stopped selling incandescent lighting. LED lighting has a much longer lifespan and is more energy efficient, saving consumers significant dollars and requiring less maintenance over time. In fact, they use at least 75% less energy and last up to 25x longer while emitting very little heat (compared to incandescent bulbs releasing 90% of energy as heat).

LED technology is ideal for industrial uses such as parking lot and parking garage lighting, walkway and exterior lighting, task lighting, and modular lighting. Indoor lights such as recessed downlights, for example, can also benefit.

Bay Lighting provides commercial lighting solutions in Maryland, Washington DC, and Northern Virginia. We have expertise in commercial and multifamily residential properties and can provide full LED retrofits and installations, helping you save money and be more energy efficient faster. 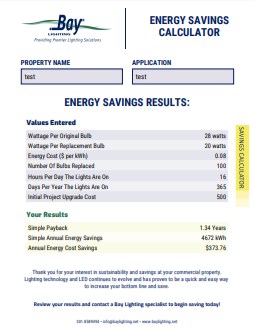